Author Virginia Welch – God Is In Control In Your Life

Ginny was born at Elmendorf Air Force Base in Alaska, the second of four daughters of Carl and Mary Hull. When Ginny was about eight months old her father was transferred to Ft Eustis, Va.; the family lived nearby in a small brick rambler in Lee Hall. In 1962 Mr. Hull retired from the Army and the family relocated to Santa Clara, Ca. to be near her mother’s clan in San Francisco. The Hulls purchased a new home in the Killarney Farms suburban development of Santa Clara, where Ginny was raised. Her father found work as a mail carrier at the Santa Clara Post Office. Her mother was hired by Santa Clara Unified School District as a secretary. Ginny attended now-closed Emil R. Buchser High School. She majored in English at Santa Clara University, married, and then earned a Master of Communications at California State University, Chico, where she also taught a business writing course. While at CSUC in 1982 she sold her first freelance article to a small secretarial career magazine, earning just enough to pay for two steak dinners―but not the champagne or tip.

During the next twenty years she followed her FBI agent husband around the United States, writing freelance articles for various publications and taking on all types of contract editing assignments. She brought four children into the world during that time, two boys and two girls. While her husband was stationed in Birmingham, Ala. she contracted as a weekly freelance foods writer for the Birmingham News. Also in Birmingham she served a short stint (before her husband was transferred again) as associate editor in the crafts division at Oxmoor House, the book publishing arm of Sunset/Southern Living magazine.

In 1991 her husband’s job took the family to the Northern Virginia/DC Metro area, where Ginny made the switch to technical editing and writing but continued to dream of producing something with a larger reach. In 2005 she was inspired to write The Lesson, an inspirational romantic comedy based on her own wacky falling-in-love story. On the night she met her husband he really did follow her home from a Bible study without her knowledge, stunning her by presenting himself at her apartment door.

In 2006 Ginny followed her husband’s government transfer one final time when the family moved to Virginia Beach, Va. There Ginny wrote Crazy Woman Creek. This western romance was inspired by a cross-country car trip in 1999 when she came upon a highway sign marking the bizarrely named creek that stretches over the northeast corner of Wyoming. When Ginny learned that no one really knew the story behind the strange name, she decided to write one. Ginny’s nonfiction book, What to Do When the Blessings Stop – When God Sends Famine required several years to write, mostly because Ginny’s time was occupied with child-raising. The same is true of her first nonfiction book, The Hiss from Hell Only Women Hear, which she wrote between 1993 and 1994. Both nonfiction titles will be released in 2013.

Ginny still lives in Virginia Beach with her husband. Their four children, daughter-in-law, and grandsons live locally. She works full-time as a writer/editor for a worldwide defense contractor. She attends New Life Providence Church in Virginia Beach. She loves to cook, sew, bake, and make machine embroidered gifts for her family. 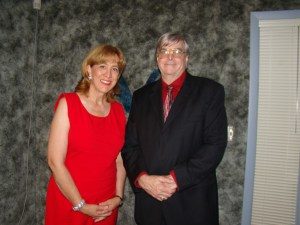